Explore our data. Read below to learn about Cypress Hill, our new campus. Read stories at our enews archive to learn more about Maasai life.  Stay in touch with International Collaborative news stories, learn more about the stove world.  Because it is evolving week by week, check back often for the latest on new livestock practices for the Maasai and safer water.  Get an in-depth view of our work through International Collaborative videos. Read about our solar micro-grid electrification project in the USAID newsletter. 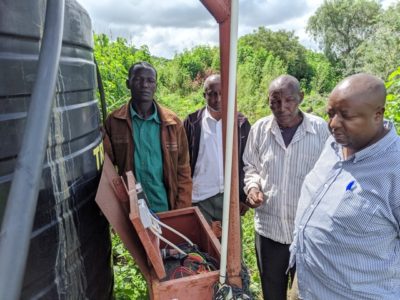 Mr. Msaki (on the right) Village Water Manager, and colleagues

Achieving a water sanitation collaboration with the District Government has been very important to us. We have been trying to make this possible for several years, and it is finally becoming a reality.

Mr. Neville Msaki, the new Manager of the Rural Water and Sanitation Agency (RUWASA), set up a permanent office in the District Government Complex. He is determined to accomplish things for the people now.

We had taken the Monduli District Commissioner and the District Executive Director to see our chlorination installations at polluted ponds in Mbuyuni. These leaders were impressed, but have broad missions and didn’t make the collaboration a priority.

However, when we gave Mr. Msaki a tour of our work, it finally clicked, as it linked so well with his own mission.

Kisioki met with Mr. Msaki several times. They established concrete steps for working together. The first step will bring clean, safe water to the people of Lemooti village. Kisioki and I had done the design and engineering for their system many months ago.

The recent meetings covered decisions about dividing the expenses. Funds will come from RUWASA and the villagers, with the Project providing only a small portion of the funds.

Most importantly, the work crew will include some people from the government water department. This will allow them to build on a full grasp of the project design and engineering.

This is a great beginning. We hope the collaboration will continue on an ongoing basis.

We hope to continue as consultants and advisors, but not funders, as the government scales up the application of our innovative technology. It is so important for health because waterborne disease is the most severe health problem the children face.

We are highly gratified to arrive at this moment, as the water system’s great health benefits obviously lay within the goals of the government. Together, we can bring the benefits to so many more people. 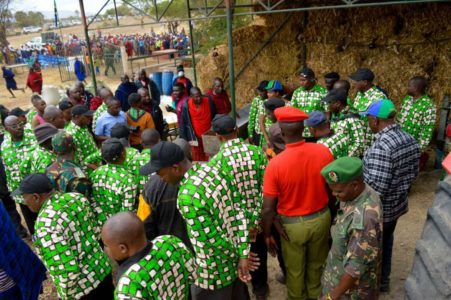 Yearly there is the Uhuru Torch race, starting from different regions throughout Tanzania, to remind Tanzanians to guard their cherished freedom, unity and peace. 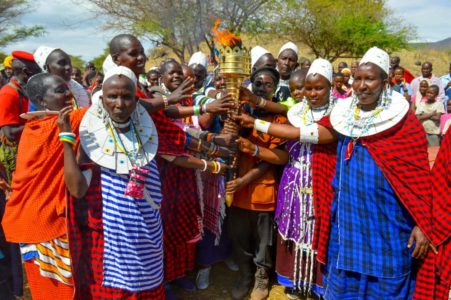 In June, 2019 the the Torch came to the Project at the Losirwa boma to recognize the core work with stoves and solar, including micro-grid work.

The Torch representatives inspected the equipment. They saw how the stove stopped smoke and the house had light.  That evening, speeches were shared, describing the importance of the work and how it must be sustained.

Welcome to the new ICSEE incubator campus at Cypress Hill

The International Collaborative for Science, Education, and the Environment, Tanzania (ICSEE(T)) opened Cypress Hill, its new campus. Located on the southern edge of Monduli in the village of Lachaine, not far from current headquarters, the new campus has been providing remarkable opportunities to expand activities and broaden our reach.

The ICSEE received this valuable gift from a Tanzanian NGO, the Association for Community Empowerment and Development (ACEDE). Headquartered in Tanga, ACEDE had been operating a vocational school on the campus, now closed. Together with Community Projects Africa (CPA) it deeded the campus to ICSEE(T,) in recognition of our record of using resources effectively for the direct benefit of the people of the region, especially the Maasai. Thank you to CPA and ACEDE for the generous gift, including funds for a portion of the initial renovations, to make this international development dream a reality.

When Johnny Weiss, the founder of Solar Energy International (SEI), visited the Maasai Stoves & Solar Project, he was very impressed with our micro-grid accomplishments. He wished to help us with a deeper study of battery-based solar grids like those in our ten-boma installation. Those were supported by our PEER grant from the National Academy of Science and USAID, Power Africa.

Maasai home, panel, and distribution box for shared electrification in one of our pilot bomas

With supplemental PEER and ICSEE funds, Kisioki focused his trip on those studies. He visited Colorado in  October 2015 for SEI’s intensive five-day lab course on solar grids. The next week he volunteered with Grid Alternatives, a Denver company that installs photo-voltaic systems in new construction.

Kisioki is excited about building on his knowledge gleaned from his SEI online coursework on solar grids that he took back home in Tanzania, and his on-the-ground experience in the initial bomas.

Afterwards we headed to Washington DC to meet with the World Bank Cookstove Taskforce, followed by meetings with the USAID, and the National Academy of Sciences.

We discussed our multi-sector approach to health, conservation, and empowerment,. Our focus is exploring the scaling rural electrification. It is important to reduce the gap between the cost of what people need and what they can afford to pay.

In conclusion, Kisioki spoke with MIT students and faculty about development and women’s organizing. He  met with a group of supporters at a talk and celebration held at Harvard University. Thanks for joining us.

Read excerpts from VP Dr. Bilal’s speech, “Spread the technology all over the country”

An historic visit to the Project

Together with Minister of the Environment Dr. Binilith Mahenge and officials of Arusha region and Monduli district, Dr. Bilal toured the Project for an in-depth look at the health, environmental, and economic benefits.

The group visited the Maasai village of Enguiki, located in the plateau of the Monduli Mountains just west of Mount Meru, 100 miles west of of Mt. Kilimanjaro. This region, extending west to Mto wa Mbu and the famed Rift Valley with its salt lakes and live volcano, is one of the areas where Maasai live today. The Vice President also visited Project Headquarters and the Factory located in this region in Monduli town.

“Difference is like night and day”, says the VP

Vice President Bilal experienced a smoke-filled Maasai dwelling where the traditional three-stone fire is still being used, and also visited homes with the new stove, and witnessed the difference the stove makes for the health and quality of life of the Maasai people. “I visited two homes, one with and one without the new stove and the difference is like night and day.” He met all 80 members of the Maasai Women’s Stove Installation Teams and observed them at work. Afterwards the entire community congregated for his speech, remarks by the Regional and District Commissioners, music performance by the children, and an exchange of gifts.

Thank you for funding our Project at the Catapult crowdfunding site

Thank you to Julia Roberts and to the Global Alliance for Clean Cookstoves for highlighting the International Collaborative and Maasai Stoves & Solar Project.  With your help, we raised the target of $27K.

Thank you to Philip Lange for the marvelous photography selections throughout the website. Thank you to Jessie Bryson for allowing us to share some of your images. We appreciate the work of Informmotion for the clear and colorful illustrations. And a special shout out to Morgana Wingard for producing such a powerful presentation about the Project.

Thank you to Stephanie Toledano and Erica Wilson, teachers at the Boston Green Academy, for creating such an interesting blog, supported by the Fund for Teachers fellowship. Read their first-hand experience of participating with the Project.

Social media helps to further the work of the Project

We appreciate the value of your spreading the Project ideas widely via social media.

Most of all, sharing your opinion and commenting on our blogs makes a real difference to the future of the Project and the International Collaborative.

Check back often as we build our social presence, including Facebook, Twitter, LinkedIn, Charity Navigator and more.